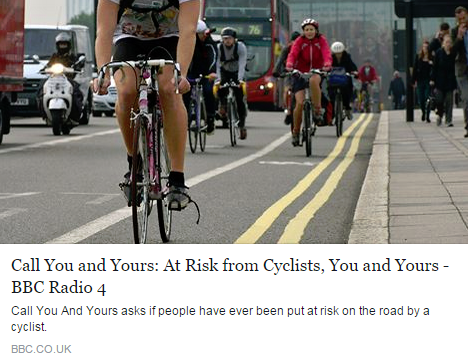 So our wonderful public broadcasting service, the BBC, has decided to jump on the charabanc and join in the war against cyclists.  Still maybe I shouldn’t expect anything else from a company that allowed Top Gear to pillory cyclists every chance it got.  But I digress.

When I started reading the article, I thought, “oh maybe it’s not too bad” as it says “Cyclist casualties have risen in recent years as the amount of cycling has increased, latest figures show that over 19,000 cyclists were killed or injured in reported road accidents in 2013.  What’s your experience on the pavement or road? Are you a cyclist who has been in an accident?”

But then this “Or are you a pedestrian or motorist who’s been in an accident caused by a cyclist?”

Note the end of the last sentence “… caused by a cyclist” which does not appear in the preceding one.  It doesn’t say “Are you a cyclist who has been in an accident caused by a motorist or pedestrian” does it?” Unbiased reporting?  You decide.